Dear Elder Oaks:
Loving Others is Easy When You Don’t Focus on Differences

Last weekend, the Mormon Church held its semi-annual General Conference, two days of religious talks that all members are expected to watch.

I’ve listened to many Conference talks in my lifetime, both before I left the Church and since. This year, one talk stood out, because I saw lots of buzz about it on Twitter. It is talk, “Loving Others and Living with Differences,” by Apostle Dallin H. Oaks, given Saturday morning.

The overall theme of “Love” might seem to place this talk above reproach, yet it is a case study of LDS manipulation at its best. In just 15 minutes, Elder Oaks deployed enough thought reform to win a round Mind Control Bingo. So I’m here to break it down. 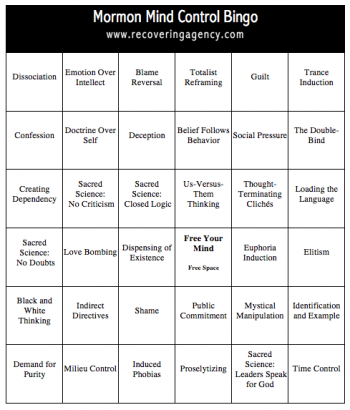 Some members will walk away from Elder Oaks’ talk feeling more unconditional love for their fellow man, with a better understanding of how to practice it.

But others will come away reaffirmed in their belief that they’re good, the outside world is evil, but in spite of this, maybe they should try to tolerate and endure all these horrible people as best they can. And that’s not love.

He starts by evoking one of the best lines Jesus ever said: “Love one another.” That’s some pretty obvious morality there. Difficult to argue with him, unless you’re a cartoon villain, or Ayn Rand.

To make sure you know he’s talking about love, he quotes the prophet, Thomas S. Monson: “Love is the very essence of the gospel.” This is an appeal to ideals, which generates euphoria and associates the organization with goodness. Anyone criticizing the Church will seem to be arguing against love itself. I’ve been accused of this many times: Why can’t you leave a good thing alone? We teach love and service!

After all this buildup, Oaks’ quickly flips love on its head, with a wince-inducing line. When I saw this quote on Twitter, I knew I had to listen to the whole talk:

“Why is it so difficult to have christlike love for one another? It is difficult because we must live among those who do not share our beliefs and values and covenant obligations.” END_OF_DOCUMENT_TOKEN_TO_BE_REPLACED

The Exponent II is publication for Mormon feminists. These open-minded women are true believing Mormons who question certain aspects of the LDS faith, especially those relating to women’s issues. It is named after the original Women’s Exponent newspaper, which was read by 10% of LDS women until the Church came out with an official women’s magazine in 1915. The Exponent II has a print publication and a blog.

In light of recent events in the LDS feminist world, some Mormons now question whether the Church is crossing the lines in to coercive behavior, and rightly so. Especially since LDS scriptures warn against “unrighteous dominion,”

April Young Bennett explores the elements of coercion employed by Church leadership, in a post called Coercion Within A Church That Values Agency. She skips past the obvious (disfellowshipping and excommunication), and covers how temple recommends are withheld from those who don’t think the right thoughts or say the right thing, and how the loved ones of accused members are brought into the mix to direct familial pressures against the heterodox member.

She points out the loaded language of the word “counsel,” which in reality means “commandment.” Members who ignore the counsel of their local leaders (Bishops and Stake Presidents), are, in effect, disobeying the commandments of the Lord.

She also mentions ostracism and how, when there’s a difference of opinion in how to interpret scripture or spiritual inspiration, by default the leader is always right, and the member is always wrong.

These tools are not always used to control the speech and behavior of members, but it happens all too often. Often enough that those who are not subject to it see the example of those who are. It hardly matters if most Bishops wouldn’t excommunicate vocal feminists. Feminists have still taken note of Kate Kelly’s excommunication and many have backed off. One example is all that is needed to modify the behavior of everyone.

Of course, this piece just barely begins to scratch the surface of the control techniques used by Mormon leadership. Most of these techniques don’t even let the member get to the point where they’re questioning at all. The techniques that Bennett outlines are a stop-gap measure for when the other thought control methods aren’t working, and the lost sheep begins to wander. The highest priority at this stage (to the totalist group) is to keep the questioning sheep from expressing their doubts aloud. This would break the spirit of unanimity that is preventing anyone else from questioning. This unanimity is often an illusion, since many are silently questioning, so those who ask openly must be stopped at any cost.

Part of the media, or have a blog? Interested in learning more about Luna Lindsey’s new book, Recovering Agency: Lifting the Veil of Mormon Mind Control?

Please check out the press kit. You can also contact Luna to see if you are eligible to receive a review copy of the book.

Press Release: Ex-Mormon Connects the Dots Between Mind Control and the LDS Church

SEATTLE, Wash. – When Luna Lindsey left the Mormon faith in 2001 at the age of 26, she didn’t think she had anything to recover from. But as she dug deep inside herself, she discovered that the church was using more than just spiritual answers to keep itself alive.

In Recovering Agency: Lifting the Veil of Mormon Mind Control (July 22, 2014), Lindsey connects the dots between LDS policies, doctrines, and culture to reveal the secrets, coercion, and brainwashing she found in the Church of Jesus Christ of Latter-Day Saints, which she backs up with the most current scientific research on social psychology.

In her tell-all book, Lindsey shares a story about a friend who got pulled into a small cult. The cult’s leader ironically suggested to Lindsey that that she be “deprogrammed” from her experience in the LDS Church.

“I didn’t take her seriously at first, but something inside me chimed,” Lindsey says. “I began reading books about cults. What I discovered about other groups and their methods resonated strongly within me about how Mormonism operated.”

In those pages, Lindsey found healing, and she wanted to pass on her newfound knowledge. She connected online with other ex-Mormons and discovered that she was not alone.

“I discovered suffering souls who had been disowned by their families,” Lindsey says. “Those who had lost jobs for changing their religious views. Those who had lost their faith, but still pretended to believe for the sake of their families and marriages. Those who, sadly, told the truth about their beliefs and lost their spouses, their children.”

Recovering Agency outlines 31 manipulative mind control techniques used by the LDS Church to keep their members obedient, and the detrimental effects of belonging to such high-demand factions.

“I’d really like to help all people find freedom of thought, integrity, self-actualization, self-awareness, and awareness of the world around them,” Lindsey says. “This book focuses on how Mormonism infringes on these principles, but other organizations and even societal thought structures do the same.”

Godless in Dixie has a good post today about some of the effects of leaving a high-demand religious system, in his case, a Christian denomination. He’s a little more harsh about Christianity in general than I’d be, but his points are valid nonetheless.

The most useful part of his post is the section on how to deal with family members who are still in the religion and who are treating you poorly. This is the sort of advice I mention briefly in Recovering Agency, but would have liked to have had more room to expound upon them. There are many other books that cover these topics, though not necessarily in a religious context.

I’ve had to do all of these, including heavy boundary-setting to the point of moving away without giving a forwarding address or phone number to family.

Especially for those of us from a religion which so heavily emphasized the importance of family, some of these seem impossible or even morally wrong. But if family can’t accept you for who you are and if they won’t stop pestering you about things you’d rather not hear about, they are, unfortunately, necessary. As Godless in Dixie says, “……some people are committed to misunderstanding you.”

This situation is very common for exmormons and doubting Mormons. Which is, sadly, a part of how mind control works. It keeps people from seeing you in any way that doesn’t fit the totalist model. It leverages our dependencies on friends and family to keep us involved. And when it can’t do that, at least, for those we leave behind, it resolves the cognitive dissonance over the question of, “If the gospel is true, why would my loved one leave?”

No wonder it always feels like my friends and family are misreading me all the time.  They’re looking at me through a lens which claims things about me that are patently false.  Seeing me the way they do requires ignoring several important things I tell them about myself, and that is no way to love someone.  If you aim to love someone, it is incumbent upon you to attempt to understand him on his own terms, and not misrepresent him.”

And if they can’t do that, then you need to take yourself seriously and add more people in your life who will accept and understand you. Until your family can do it, too.

So read the full article, particularly the advice and steps, which will help you cope with this kind of situation.

And in my case, these strategies also led to a better relationship between me and certain family members. They now really do accept me how I am, and they respect me and my path through life. You can’t always count on that happening, but it’s definitely not going to happen unless you take responsibility to protect yourself.

Brené Brown on Shame and Vulerability

Brené Brown calls herself a “vulnerability researcher,” and through her work, she’s learned more about shame than she ever wanted to. I found her conclusions highly enlightening, and I quoted her in Recovering Agency on the chapter in shame. She also taught me more about unconditional love than I’ve learned from any other single source.

Healing from shame is possibly the most important aspect of recovering from a high-demand group or even from an abusive relationship or family of origin. And understanding a thing puts you halfway there towards healing from it.

Two TED Talks from Brené Brown on Shame and Vulnerability. Watch them in order. In addition to these, her website has more videos and helpful information on shame.

The Power of Vulnerability: